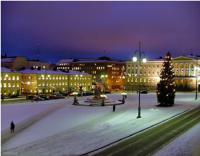 New Year's Day is approaching and you still do not have plans for it? In this case, do not waste more time and make your plans now. If this year you want to meet New Year's Eve with friends and family, and at a somewhat unusual place, why not exactly in Sorrento, southern Italy.

Probably most people do not even have heard of this enchanting little town? It is situated in the south of Italy and its area is about nine square kilometers. The local population is about 17 thousand. People. It is believed that the city was founded in the 7th century BC One of the old names of the city Sorentium (coming from the cheese). According to the legends in here Odysseus and his companions are enchanted by the song of the sirens.

The city except f...

St. Petersburg is among the most exclusive and amazing places in the world. Populous city ranks second ranking after the capital - Moscow. About 2 centuries the city serves as the capital, so often e called "northern capital of Russia."

The city is the seat of Kontitutsionniya Court and the main Russian port. St. Petersburg is well known for its rich history and architecture and its many cultural and scientific centers.
Among the main attractions that are worth seeing are:
Hermitage Museum - considered the biggest museum in the world of art. Visiting it You can see many works of art from the period of the Stone Age to the early 20th century. Entrance for students and pupils is free, and the rest is 400 rubles, or about 11.00 lev mus...